Fabrication of CuO, ZnO, and ZnO/CuO binary metal oxide nanocomposites with different molar ratio of Zn/Cu (3:1), (1:1), and (1:3) were carried out via a coprecipitation method. The improvement characteristics of ZnO/CuO nanocomposites and structure phases were characterized by X-Ray Diffraction (XRD). Crystallite size was obtained by the Scherrer equation. The morphology was determined by Scanning Electron Microscopy (SEM) images. Elemental composition was determined by energy dispersive X-ray EDX. Measurements and evaluation of the photocatalytic efficacy of the ZnO/CuO nanocomposites were deducted and observed by photodegradation of Methyl Orange dye (MO) under UV lamp illumination, monitored by UV-Vis spectrophotometer. The optimum concentration of ZnO/CuO (3:1 molar ratio) exhibited the highest degradation percentage (100%) under the UV lamp, which is demonstrated superior efficiency compared with the other various ratios and pure ZnO and CuO CuO, (1:1) ZnO/CuO, (1:3) ZnO/CuO and (3:1) ZnO/CuO for the degradation of methyl orange dye.

Organic dyes are widely used in industrial applications due to their ease and effectiveness, but in contrast, their polluted residues are frequently found in industrial waste water resulting from the production of factories and discharge of their effluent wastes into natural water, which is not desirable because they induce indirect hazards through the formation of harmful intermediates (which are more toxic than the original compounds) and release of their highly toxic, polluting by-products into the natural waters. Within the dyeing process, around 12% of these dyes deports waste, and about 20 % of this wastage steps inside the environment. Non-degradable organic molecules existence poses difficulty removal of pollutants [1]. Researchers have devoted their efforts to finding solutions to recycle, utilize and purify industrial wastewater by converting dyes products into harmless materials. For this purpose, dye degradation is an effective solution. The degradation process involves converting large hazardous molecules of dye into easily degradable, harmless small molecules such as water, carbon dioxide, and minerals as side products. Photocatalysis is a suitable method for degradation, transform dyes products into safe byproducts. Compared with other methods, photocatalysis is a highly efficient, and economically feasible process [2]. Many metal-oxide semiconductors have been broadly considered in the photocatalytic degradation field because of the captivating attributes: Photosensitivity, economical, unpolluted nature, and environmentally safe. Therefore, they are employed in the photocatalytic process to improve its performance. One of these metal oxides, ZnO nanoparticles. Due to its fascinating characteristics, ZnO has been widely utilized in some dye degradation due to its stability, high photosensitivity, and wide bandgap. But the only limitation of zinc oxide is its highly effective only under UV irradiation and absorbs an insignificant portion of the visible spectrum [3,4]. Researchers worked to develop the performance and efficiency of ZnO in several ways. Doping process is one of the manners which enhance the photocatalytic activity including modification and combination of photocatalyst with a different metal oxide. Modification of ZnO (n-type semiconductor, band gap 3.37 eV) with incorporate another metal oxide such as CuO (p-type semiconductor, band gap 1.27 eV) can be useful as it augments the surface area, reduces the bandgap (due to p-n heterojunction), and performs extending ZnO absorption range to visible spectrum region which enhance photocatalytic activity. Many methods were used to prepare ZnO/CuO composite one of them is coprecipitation [5]. In coprecipitation method different molar ratio of zinc and copper precursors were used at specific temperature. Gajendiran and Rajendran used 2.16 g of zinc acetate dihydrate with 2.21 g of copper acetate dihydrate for 120⁰C for 15 hr the final product has spherical shape [6]. Benxialix prepared ZnO-CuO composite by using 2:1 molar ratio of ZnCl2 and CuSO4 at 80⁰C for 24 hours [7] while Susmita et al. mixed ZnSO4 and CuCl2 at the same experimental conditions. The ZnO/CuO composites obtained [8] have nanoflower structure. Mekdes synthesized ZnO/CuO composites by mixing 0.272 g of zinc nitrate hexahydrate with 0.2497 g of copper nitrate pentahydrate for 80⁰C for 15 hr [9]. The ZnO/CuO composites synthesis by mixing zinc chloride and copper oxide in the presence of hexadecyltrimethylammonium bromide (CTAB) and sodium hydroxide as surfactants [10].

Various molar ratios of ZnO/CuO nanocomposite with different molar ratio of Zn/Cu (3:1), (1:1), and (1:3) respectively were prepared by mixing 20 ml of ethanolic (2.33,1.48,0.74 g) Zn (NO3)2.6H2O (Solution 1) with (0.6, 1.1,1,81 g) copper nitrate (Solution 2) drop wise with constant stirring. After mixing (1 M) ethanolic oxalic acid solution was added drop wisely with constant stirring. The precipitate was filtered, washed with ethanol, then acetone, and dried overnight in the air at room temperature. Precursor was calcined at 600℃ in a muffle furnace for 3 hours (Figure 1). Pure ZnO and CuO were prepared by the same procedure.

Figure 1: The schematic view of ZnO/CuO nanocomposite synthesis by coprecipitation

The photocatalytic degradation of MO was investigated in the presence of ZnO, CuO and various molar ratios of binary ZnO/CuO. 100 mg of each catalyst was added to 100 ml Methyl Orange (MO) aqueous solutions (1 ppm). After 1 hour in the dark, 5 ml was withdrawn, and then exposed the solutions to the UV lamp irradiation for 180 min. At a given time interval, 5 ml of the mixture was taken, centrifuged to separate the catalyst from the solution. The photodegradation of MO was analyzed by UV-Vis double beam spectrophotometer (UVD-2960) at its maximum absorption wavelength of 464 nm.

Where D is the crystalline size in Å, λ is the X-ray wavelength (1.54 Å ), β is Full Width at Half Maxima (FWHM) of observed peak, and θ is Bragg’s diffraction angle. The prepared photocatalysts exhibits sharp peaks in XRD patterns and the crystalline size is less than 100 nm which mean nanocrystalline nature of these composites. Dislocation density (δ ), microstrain (ε ) and lattice constants (a,c) were calculated at the most instance peak at reflection plane (101) of ZnO (Table 1). Microstrain values of ZnO/CuO nanocomposites vary with varying molar ratio of the samples while the ratio c/a is found to be 1.732 which conforms the formation of close packed structure, The change in dislocation density, microstrain ( ε ) and lattice constants due to the incorporation of Cu+2 into Zn+2 during the crystallization (Figure 2). 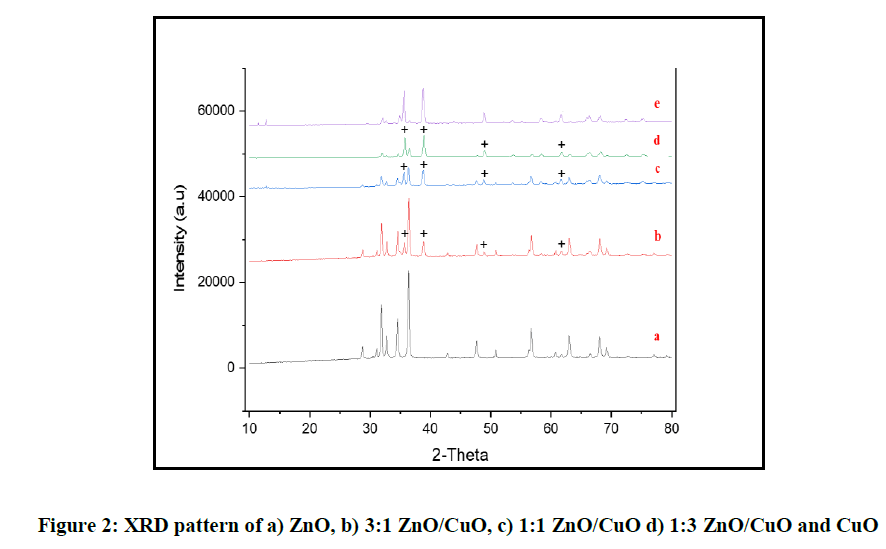 Morphological studies of the ZnO/CuO nanocomposite: The morphology of ZnO, CuO and ZnO/CuO nanocomposite was evaluated using Scanning Electron Microscopy (SEM) (Figure 3). The SEM micrograph of pure ZnO nanoparticles showed homogeneous distribution of spherical morphology with size range from 22-50 nm. The synthesized CuO nanoparticles found to be well defined, spherical identical crystalline structure agglomerated and form a cluster. The ZnO/CuO nanocomposites SEM images showed remarkable morphology change in shape and particle size. This is due to the incorporation of Cu+2 into Zn+2 during the crystallization. Sample ZnO/CuO (3:1) with high ZnO molar ratio Zn 2.86/CuO 4.04 consist of small irregular spherical like shape structure with size from 35-70 nm which is aggregate in larger one. As ZnO molar ratio decrease in sample ZnO/CuO (3:1) which shows nodular spherical like shape in particle size around 32-100 nm. Meanwhile the morphology of sample ZnO/CuO (1:3) shows agglomeration of the nanoparticles with small particle (30-100 nm) appears on the surface. The EDX gave information about the elemental distribution of the nanoparticles and purity of the samples (Figure 4), the EDX of the pure oxides showed two peaks one for oxygen and the second for corresponding metal Zn in ZnO and Cu in CuO respectively. While the EDX of the different molar ratio ZnO/CuO nanocomposites gave peaks indicate the presence of the three elements which support the formation of the ZnO/CuO nanocomposite. It is worth to mention the oxygen peak conforms the presence of zinc and copper in their oxidized form (Table 2). The absence of impurity peak in all the spectra is prove of the purity of the prepared photocatalyst. Photocatalytic degradation efficiency of the prepared material was evaluated at different methyl orang concentration (1,2,5,5,10 ppm). The absorption spectrums at 464 nm gradually decreased and achieved the maximum degradation at 180 min. In the present work, 1 ppm of MO at pH 7 with 100 mg of photocatalyst was chosen to assess the photodegradation efficiency.

The optimum concentration of ZnO/CuO (3:1) nanocomposite which displays the highest photocatalytic activity (100% removal of dye after 180 min) because CuO provides effective charge transfer of narrow bandgap semiconductor of CuO to the wide bandgap of ZnO semiconductor, thus diminish recombination of charge carriers by electrons transfer. While sample ZnO/CuO (1:3) reduces the photocatalytic activity due to the increase in the amount of CuO, which leads to covering the surface and active sites of ZnO, and thus reduces the absorption of UV irradiation (Figure 5). The expected mechanism of photodegradation shown as follows. When directing light on the photocatalyst the ZnO/CuO nanocomposite, electrons of CuO will be excited (1) and immigrate zfrom the valence band into the ZnO conduction band (2) forming the positive holes in both semiconductors. Since ZnO is located lower than CuO, the electrons transferring process to and from the valence and conduction band between them is easy. Meanwhile, produced electrons perhaps interact with O2 and decompose the dye (3 and 6). While the h+ in CuO maybe react with OH¯ or H2O formed H2O2 and OH• (4 and 5). (Figure 7) 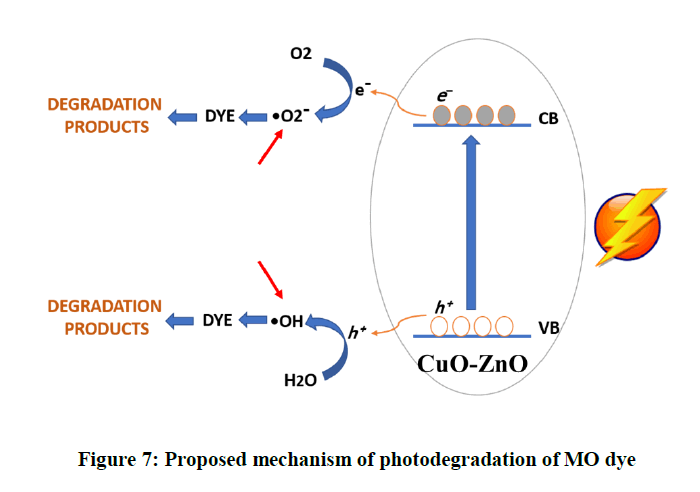 In summary, we have synthesized different molar ratios of binary metal oxides ZnO/CuO for photodegradation of methyl orange under UV irradiation. XRD results explicate the hexagonal wurtzite phase of ZnO and monoclinic phase of CuO. ZnO/CuO (3:1) completely degrades the dye after 180 min of illumination time. Doping of zinc oxide with copper oxide is a good method to fabricate effective photocatalyst enhancing the degradation of wastewater dyes.